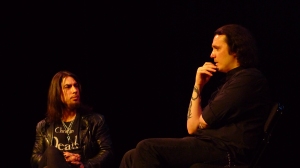 Apparently his week-long run performing as the titular character in the musical Hedwig and the Angry Inch at the Roxy in November was not enough for Donovan Leitch.  This Thursday, the 20th, Donovan returns to the famous Hollywood club as Camp Freddy begin their sixth annual holiday residency.  As expected the three consecutive nights sold out as fans eagerly await not only the band, but also the unexpected guests who join them.  Given that Camp Freddy’s members are the aforementioned actor / singer Donovan Leitch, Billy Morrison (The Cult, Billy Idol band), Matt Sorum (Guns N Roses, Velvet Revolver, The Cult, Neurotic Outsiders), Steve Stevens (Billy Idol) and Jane’s Addiction’s Dave Navarro and Chris Chaney, it is not a surprise that there are many friends of the band that join them to perform.  Considering that guests have included Billy Idol, Steve Jones of the Sex Pistols (who was also Sorum’s band mate in Neurotic Outsiders), Slash, Kid Rock, Chester Bennington and Mike Shinoda of Linkin Park, Aerosmith’s Steven Tyler and Macy Grey, there is no telling who will show up to join the band on stage.

For those of us who were unable to get tickets for the show, we can get through the season knowing that we can purchase the soundtrack for West of Memphis which will include Camp Freddy’s cover of David Bowie’s “The Jean Genie.”  The documentary film, directed by Amy J. Berg (the Academy Award nominated Deliver Us from Evil), follows the case of Damien Echols, Jason Baldwin and Jessie Misskelley, Jr., collectively known as the “West Memphis Three.”  Echols, Baldwin and Misskelley, Jr. were arrested and convicted as teenagers for the murders of three children in West Memphis, AR in the mid-nineties.  Although DNA evidence collected ultimately exonerated the trio, they spent 18 years in jail, with Echols serving a death sentence, while Baldwin and Misskelley received life imprisonment sentences. A portion of the proceeds from the sale of the soundtrack will be used to raise funds for the exoneration of Echols, Baldwin and Misskelley, Jr.

Damien Echols, one of the producers of West of Memphis, released his critically acclaimed autobiography, Life After Death, earlier this year.

West of Memphis will be in selected theaters on Tuesday, December 25th.  The soundtrack will be released through Sony Legacy on January 15, 2013.

Here’s a look back at some previous Camp Freddy shows to get you pumped up for this weekend’s Christmas residency at the Roxy. If you make it to the shows, we’d love to hear about your experience in the comments below. Or post a link to your photos and videos of the Camp Freddy shows!

This entry was posted on December 20, 2012, 10:27 am and is filed under Celebrity, Concert, Movie Review, Music. You can follow any responses to this entry through RSS 2.0. Both comments and pings are currently closed.