Posted by Cindy Robinson, Life on the Scene in DVD/Blu-Ray Review, On The Red Carpet, Photography on September 28, 2010

Paramount Pictures & Marvel Entertainment’s Iron Man 2 starring Robert Downey Jr is out on DVD and Blu-Ray today! Look for an alternate beginning to the film and nearly three hours of bonus features. 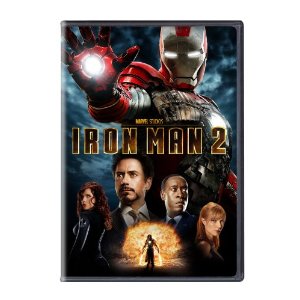 Follow up to Marvel’s 2008 smash hit Iron Man, the sequel also features Gwyneth Paltrow, Mickey Rourke, Scarlett Johansson , Don Cheadle and Sam Rockwell. The sequel wasn’t quite as great as the first film, feeling a bit choppy in places but there’s no denying that Robert Downey Jr put on a stellar performance with his usual sarcastic wit & charm. Mickey Rourke’s brief appearance as Whiplash was strong.

Iron Man 2 picks up six months after the end of the first movie, where Tony Stark (Robert Downey, Jr.) has used his Iron Man armor to bring about a negotiated peace treaty between the major super powers of the world, and his immense popularity with the general public is only furthered when he fulfills his father’s dream by opening the “Stark Expo”, to showcase all the latest inventions that will benefit the world. Stark is, however, still vilified by the United States government, and Senator Stern (Gary Shandling) in particular, who demands that he hand his armor technology over for military application. Stark refuses, publicly shaming rival Justin Hammer (Sam Rockwell) in the process by highlighting his own failed attempts at recreating the technology. All is not well in Stark’s life, however: he has discovered that the palladium in the arc reactor keeping shrapnel from penetrating his heart has begun to poison his body, slowly killing him, and all attempts to find a substitute element have failed. Slowly going off the rails as a consequence of what he believes to be his impending death, he appoints his former personal assistant Pepper Potts (Gwyneth Paltrow) CEO of Stark Industries, replacing her with Natalie Rushman (Scarlett Johansson). 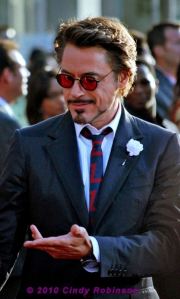 We’ll next see Iron Man and Scarlett Johansson’s character, Natasha Romanoff (the Black Widow) in the upcoming Joss Whedon directed Marvel mastermind, the Avengers due out in 2012.