Four Kings & An Ace at the London West Hollywood

Posted by Cindy Robinson, Life on the Scene in Celebrity, Charity, Fundraisers, On The Red Carpet, Photography on December 5, 2012

Mending Kids International hosted their annual Fall fundraiser, Four Kings & An Ace Celebrity Poker Tournament, on Saturday night at Gordon Ramsay‘s restaurant inside the London West Hollywood. The evening’s proceeds benefit children in over 51 countries around the world in Central and South America, the Caribbean, Africa and Southeast Asia to give children access to critical surgeries that they would otherwise not be able to receive due to lack of medical or financial resources.

These celebrities were able to raise enough funds for eight missions to provide almost 200 children around the world with life-saving surgeries. Mending Kids International (www.mendingkids.org) is a California-based non-profit that provides surgeries to children otherwise unavailable to them in developing countries, and surgical training to medical staff to build long-term sustainable surgical programs.  92% of every dollar received goes directly towards helping children.

Will Hartman walked away with the night’s poker trophy. Those who didn’t play poker enjoyed casino games and entertainment provided by The Commodores Band, American Idol Winner Lee Dewyze, and Dominic Scott Kay.

MKI is a tremendous charitable organization that ran an amazingly well-organized fundraiser. Life on the Scene is always on board to help out this charity in the future!

The only real snag in the evening was the fact that while KISS frontman Gene Simmons gave very generously of his time to the event, his personality was sorely lacking as he wouldn’t give the time of day to most of the attendees that paid a top dollar donation to attend this wonderful event. 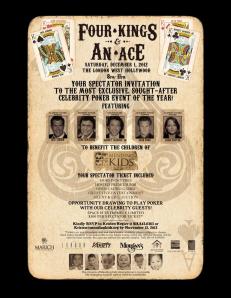 A limited number of tickets to play poker with the celebrity guests as well as spectator tickets are still available. Event tickets can be purchased here. The tournament will take place inside the Gordon Ramsay restaurant at the London West Hollywood.

The evening proceeds benefit children worldwide who are in need of life-changing surgical care. Over the years, thousands of children have received corrective, transformational surgeries that have given them a chance at longer, healthier and happier lives. Most of the surgeries performed are to correct congenital heart defects, orthopedic abnormalities, severe scoliosis, and significant cranial facial deformities.